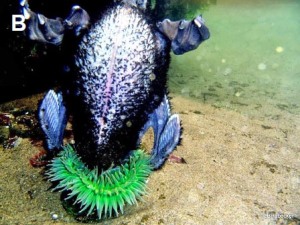 You wouldn’t think birds would be on the menu of a marine invertebrate, especially one that’s stuck to the sandy bottom of a tide pool.  But you’d be wrong, and Lisa Guy has the pics and the video to prove it.

A researcher at the University of Washington, Guy captured a giant green anemone gulping down a baby cormorant like a snake eats a rat. Although it’s name suggests a goliath monster that might appear in a horror movie, it’s actually only about seven inches tall–way smaller than the bird. Its normal diet consists of small fish and crabs.

Like their close relatives, coral and jellyfish, sea anemone capture their prey by ensnaring it in tentacles and injecting it with neurotoxins. The tentacles pull the prey into its toothless mouth to be digested. Unlike jellyfish, sea anemones can’t move around because they glue themselves to the bottom, which means they’re opportunistic feeders like corals. They can only wait for food to swim or drift into their trap.

Which begs the question; how did an anemone catch a bird? Guy doesn’t have an answer to that question, but in the article  she wrote for the journal Marine Ornithology, she hypothesizes that it either fell from its next on the rocky cliff above the water, or it was dropped there by an eagle or some other predator. The bird had been dead for a while when Guy found it, probably about two days, she thinks.

It’s not the first time an anemone has been caught with a bird in its maw. Six years ago, a seagull’s foot was found disappearing into the mouth of a giant green anemone in a tide pool in Oregon, and in 2003 scientists observed a baby gull fall from its next into right into the waiting arms of a green anemone, which proceeded to swallow it whole.